My latest book, One Faith, Two Authorities: Tension Between Female Religious and Male Clergy in the American Catholic Church, published by Temple University Press in March 2019 and featured in Paul A. Djupe’s series, Religious Engagement in Democratic Politics, examines different types of authority of male and female religious leaders in the American Catholic Church and how they work to influence social and public policy.  This manuscript also gives specific attention to the Doctrinal Assessment of the Leadership Conference of Women Religious.

I am the editor and contributing author of, Unconventional, Partisan, and Polarizing Rhetoric: How the 2016 Election Shaped the Way Candidates Strategize, Engage, and Communicate through Lexington Books.  This work features scholars who are at the forefront of examining key issues of the 2016 election, such as gender and intersectionality, race, ethnicity, rhetoric, campaign strategies, religion, and immigration. 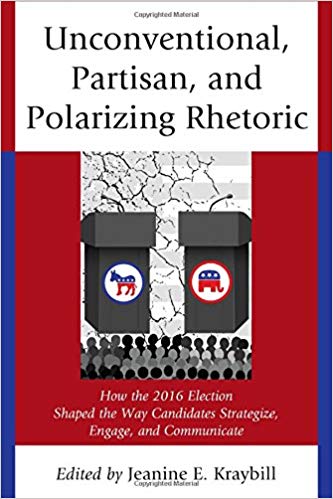 “Evaluating Policy Differences Between Male and Female Religious Groups: A Study of the Social Policy Statements by the United States Conference of Catholic Bishops and the Leadership Conference of Women Religious.” The Journal of Communication and Religion, Fall 2016 39 (3): 76-99.